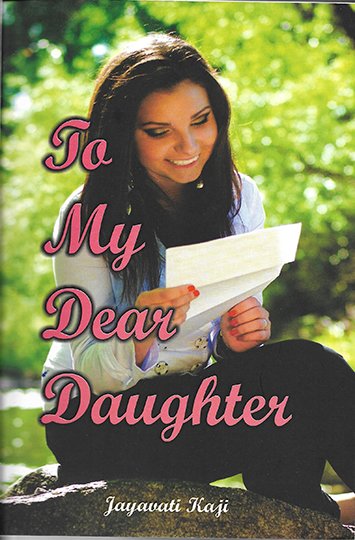 To My Dear Daughter This is a Translation of a very popular Book in Gujarati called “વહાલી દીકરીને” published in 2012. The translation of this book is in response to great interests expressed by many parents, to have such...

To My Dear Daughter

This is a Translation of a very popular Book in Gujarati called “વહાલી દીકરીને” published in 2012.

The translation of this book is in response to great interests expressed by many parents, to have such a thought provoking book available for their young daughters, who may not be verse in Gujarati.

This is a collection of letters from a mother to her adolescent daughter who is at a threshold of adulthood. The author shares her inner turmoil, thoughts and vision on the life’s complex facets such as sex, relationship, love, marriage, career and challenges of balancing them. These letters are honest, reflective and probing.

Author echoes sentiments of mothers who share their predicament and concerns for their young daughters in this fast-paced world. Her message to all young women, which is how to make a daily life and relationships more meaningful and complete.  Author has high hopes, aspirations and expectations from them. She challenges them to assume an active role in defining the new social order that offers equality and justice for the women.

Author’s own diverse study of social phenomena combined with her immense reading makes her writing insightful. Her profound ability to extract essence and presenting these conceners in her delightful and conversational manner is sure to appeal and inspire young readers.

“You have to carve the new path for yourself”

Women in India are at the crossroads – a turning point today. She doesn’t want to shun all her previous roles and the new roles that she desires have not become acceptable. She is swinging between two diametrically opposite poles – the poles of modernity and tradition. Shuchi! This is true, not only for women but for the men and society, too. They are all torn between two alternatives.

It has become imperative that Indian women carve a new, unique trail for themselves. She has to give special attention to one thing. She should desist from following the trail western women have taken. Western women are facing loneliness, estrangement and insecurity today. She is confused about the future course of action that she needs to take in her life. When she moves away from being the hub or pivot of home and family life – she gets flung in the appalling abyss of external world.

In her mad craving for becoming a ‘Super Woman’, she experiences tremendous stress. She loses her pivotal role of a loving housewife and in the bargain loses her composure, calm, contentment, joys and bliss.  In a special issue of ‘New York Times’, majority of the 20 most successful celebrities and high-positioned women opined that giving priority to children during the course of building a high profile career is what they deem fit, proper and worth doing.

There is a poem by Nalini Madgaonkar which corroborates the opinion mentioned above. The poem ‘Woman (Naari)’ goes like this:

Without ever forgoing the Rights given by Nature

If I perform a task of my choice

Who says that I am enslaved even a bit?

The lines following these lines also mention that:

‘I don’t want to sacrifice my family-life with spouse

I am a woman

A woman to the core’

Shuchi! Women have made a choice between ‘love’ & ‘live’, and ‘LOVE’ has come a cropper in their lives. ‘Love’ is the most essential of all the treasures that women need. She has ‘Power’ in her. She wants to carve a ‘Niche’ for herself. Simultaneously she does not want to neglect or sideline the ‘womanhood’ that god has given her. She must take decisions as to where she needs to go and where she needn’t. She asks of herself, ‘Am I going to get enslaved by doing what I like without ignoring the rights given by Nature? Why should I feel diffident in doing those tasks or playing those roles? If women ‘will’ they can work wonders,

Women have a beautiful Ideal Idol in the form of ‘Half-male Half-female Deity’ i.e. Ardhanareeshwar. How beautiful the whole concept is! Don’t you feel so, Shuchi?  Men and Women – enjoying equal status as a human being but still playing complementary role together! One is incomplete without the other. Woman is the most wonderful invention of Nature; she is extremely attractive, pleasing to the core, beauty incarnate, Yogi, a female protagonist, a devotee, a housewife. She is singular in any of these roles.

These are all the roles that a woman plays. Dear Shuchi! a woman has to become a complete and perfect woman. To accomplish that perfection Prakriti (the Nature) and the Purush (the Essence) have to conjoin, amalgamate and emerge as one. The matter and the spirit – the intellect and the essence have to combine to relish fulfillment.

The 21st century woman should take pleasure in in her womanhood. She should not feel herself inferior to anyone. She is neither weaker nor inferior to man. In the same manner- the male counterpart should not consider her as inferior or weaker. Man brings woman to the fore and woman makes man complete. Intellect without faith and devotion without knowledge are both imperfect.

Shuchi! Males should shoulder the household responsibility of mundane daily domestic chores, rearing and nurturing children and playing common social roles – on equal footing. This requires cooperation and companionship of both the players – male and female. Unless this is accomplished, human race is half-complete. To realize completeness & perfection, both have to put in concerted efforts, together. It is necessary that they do not compete with each other; they should rather play a complementary and supportive role for each other.

Shuchi! The poet laureate Rabindranath Thakur had stated something on the subject, which is worth noting and underlining.

“When women begged of Him a garland of tender flowers, He gave her the boon of intense effort-making. He gave her the arduous responsibility of committing herself to the avowal. It is her religious penance. The dignity of being a woman is enshrined in this penance. Women did not know their own value therefore they wanted the most delicate of things for themselves. But God knew her potential, greatness and majestic glory, therefore he did not pay heed to what they asked of him, but gave them what they were capable of – severe penance as a gift. He gave them purity, humility, devotion and capacity to surrender their selves – to a much greater extent than he gave these things to men.

In this landmark phase of history, our culture is more male dominated as they create it. Women have been sidelined and pushed into a shadowy place. This is why our culture has lost its balance. The time has come that women come to the fore – in the frontline – to endow concord to the thoughtless authority of the authoritarian men–  it is like bringing a kind of harmony to make up for the shortcoming in men.

Margaret Mead is considered as the world-renowned archaeologist, scientist, writer and a humanist. Her thoughts go in tune with what Rabindranath Thakur had said. Mrs. Margaret Mead says that women should not become a tool of continuing the system that men have created – not in the same manner that is prevalent today. She must dedicate herself to the task of creating a humane society using the divine embellishments that she inherited from her creator and the age-old cultural legacy that she imbibed.

Shuchi! Equal rights or equality lies in letting women get all the opportunities so that she can fulfill her responsibility of converting the dream of a Humane Society into a reality. Shuchi! Don’t you think that we should look at these two viewpoints side by side and blend them integrally? The movement of Equal Status for Women is a revolutionary event. It has given a new dimension to human life and human relations. However, this movement has to be given a new meaningful dimension. We have wasted all these years in trying out defective and evil thoughts on the issue.

Women do hold the lamp of the world

Still the world has put her in chains

Dear one! One very important dimension is still not covered in this elucidation. Women need to journey inwards for the sake of family and social life, for keeping our culture active and thriving. Let us raise our hands upwards, pray to Him with full concentration and seek from the Supreme only one thing – Let me think beyond the commonplace matters of life. Let me go beyond the everyday pains and sufferings of life. Let the love that He has put in our hearts – come to the fore and accomplish the goals He has ordained upon us.

Shuchi! When women have started treading on the path of revolution – the only wish that we need to make is:

O, My daughter! Let your path go along the cool embankments of a stream

And let the green canopy protect you from the tortuous heat

Let the winds be always cool and propitious for you and

Let the path be ever unbroken and out-and-out good

Let this journey be auspicious and fulfilling for the entire human race.

With all the good wishes at my command.